However... there are use cases where you work in bigger teams and need to manage hundreds of templates. Integrating cfn-lint in a CI/CD pipeline helps to enforce rules over shared CloudFormation templates, which in turn makes standardizing rules and guidelines over bigger teams easier. We are going to be integrating cfn-lint in AWS CodePipeline using a custom AWS CodeBuild project. 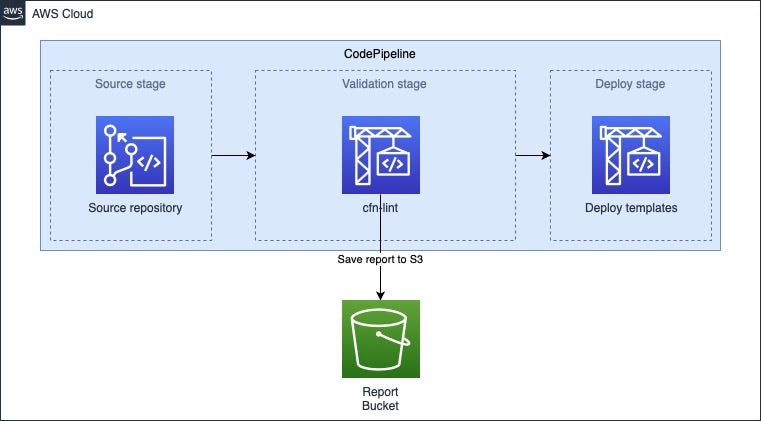 If we're building the pipeline it looks as follows (snippet):

It contains the three stages that were mentioned before Source -> Validation -> Deploy including an artifact bucket to save the artifacts from the build.

The most important part of this pipeline is the Validation stage. This contains the CodeBuild step and looks as follows (snippet):

The cfn-lint tool is added as a CodeBuild action in the validation stage of this pipeline. We add additional environment variables like the AWS Account ID, S3 report bucket, KMS Key and the pipeline name. The next step is to setup the buildspec of the CodeBuild project to add the container with the commands that need to be executed. The buildspec looks as follows:

First, we install the required packages in the container, so we can run cfn-lint. Next, we run cfn-lint and make sure the command won't exit (set +e) when it reports an error. In this situation, we don't want to stop exit CodeBuild if we discover error because we use cfn-lint only for reporting.

In this setup, I've included a configuration file which specifies what templates need to be analyzed. After the analysis, it will generate a report in JSON format which will be uploaded to an encrypted S3 bucket. As you can see the S3 CLI command is being used to transfer the report to the S3 bucket. We've included the variables which we passed from the AWS::CodeBuild::Project resource to dynamically create the object and enable KMS Encryption. After the report is uploaded to S3 it is ready for consumption for other applications.

If you enable AWS KMS, make sure to include the following policies for the CodeBuild role:

The CodeBuild role is allowed to put the report in the destination bucket (CfnLintBucket). We also allow the role to encrypt the object using the KMSKey we created for the S3 Bucket. Then we need to explicitly allow the CodeBuildRole on the KMS Key policy, we can do that as follows:

We've set up a CodePipeline which adds cfn-lint as a validation stage to analyze your CloudFormation templates and send the reports to an encrypted S3 Bucket. This allows auditors for example to check how well the templates are built according to best practices.

Hi Danny, thank you for the post. From my experience, it would worth adding a step for updating CF resource specifications. cfn-lint -u It would help reduce false-positives. Specification changes are not rare. 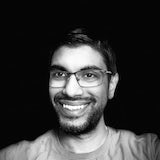 Does CloudFormation come up a lot on the SAA-CO2?